Highlighted Play and Drill for Week of Nov. 30th

Below are the highlighted plays and drill for the week: Special vs. Zone Defense, the Chair Drill, and 1-on-1 Lane Containment. 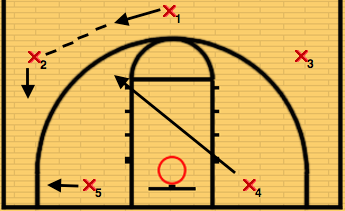 1. Start in a 1-2-2 set vs. zone with an odd or an even front zone defense. 1 takes it to a side (should be where your best shooter is – in this case it is the 2 man) and hit the 2 man who dribbles towards the corner. 5 (strong side post) steps out to a spot just inside the 3-point line. 4 (opposite post) flashes high to the ball side elbow. 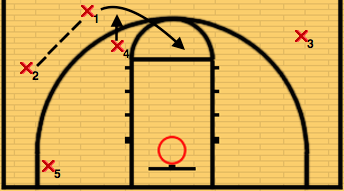 2. 2 throws back to 1 who dribbles towards the opposite elbow. As he passes the 4 man, the 4 man steps outside the 3-point line. 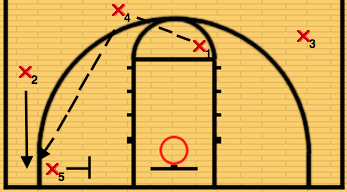 The reason this play works is because of the misdirection in the play. The zone moves with the 1 man’s dribble to the opposite elbow and then we get a throw back to the opposite side. 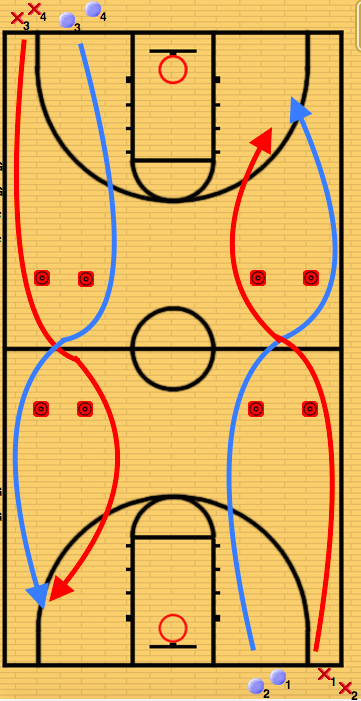 This drill is high intensity and quick. We generally go for about 5 minutes total.

There are 2 lines at each corner of the court. The first two players in each of the offense lines have a ball.

The offense goes one the guy in front of them shoots at the other end.

The offense dribbles the ball outside of the chair directly in front of them on their side of half court and then crosses over at half to the outside side of the opposite chair.

The offense continues to go, trying to score at the rim – we do not want them to shoot jumpers in this drill and let the defensive man off the hook.

The defense sprints outside the chair directly in front of him on his side of half and then crosses over to the outside of the opposite chair at half court. He then must look to pick up the ball outside the 3-point line.

They will then play 1-on-1 to the basket using our defensive principles.

Since we have the next group going once a shot is put up by the previous group, we only allow one attempt to score by the offensive player. 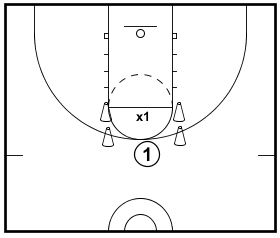 Boundaries are the lane lines. Offense starts with the ball between the free throw line and top of key. Defense begins an arm’s distance away from offense.

Offense’s goal is to beat the defense to the baseline in 6 seconds without going outside the lane lines or turning your back to the defense while dribbling. Defensive goal is to force offense outside the lane lines or don’t get beat to the baseline in 6 seconds. You can progress drill to have offense finish with a one-footed lay-up.