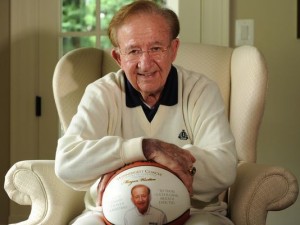 “People say Morgan Wootten is the best high school basketball coach in the country. I disagree. I know of no finer coach at any level high school, college, or pro. I’ve said it elsewhere, and I’ll say it here: I stand in awe of him.”
-John Wooden – Head Basketball Coach, UCLA (1949-75)

Morgan Wootten coached an amazing 1,274 wins during his tenure as Head Basketball Coach at DeMatha High School in Hyattsville, MD. His career winning percentage of .869 is the highest winning percentage of any coach with more than 500 wins in the history of organized sport. The prestigious Naismith Foundation has named Morgan Wootten the No. 1 Prep Coach of the 20th Century. And, on October 13, 2000, Morgan Wootten was inducted into the National Basketball Hall of Fame. His career highlights include: